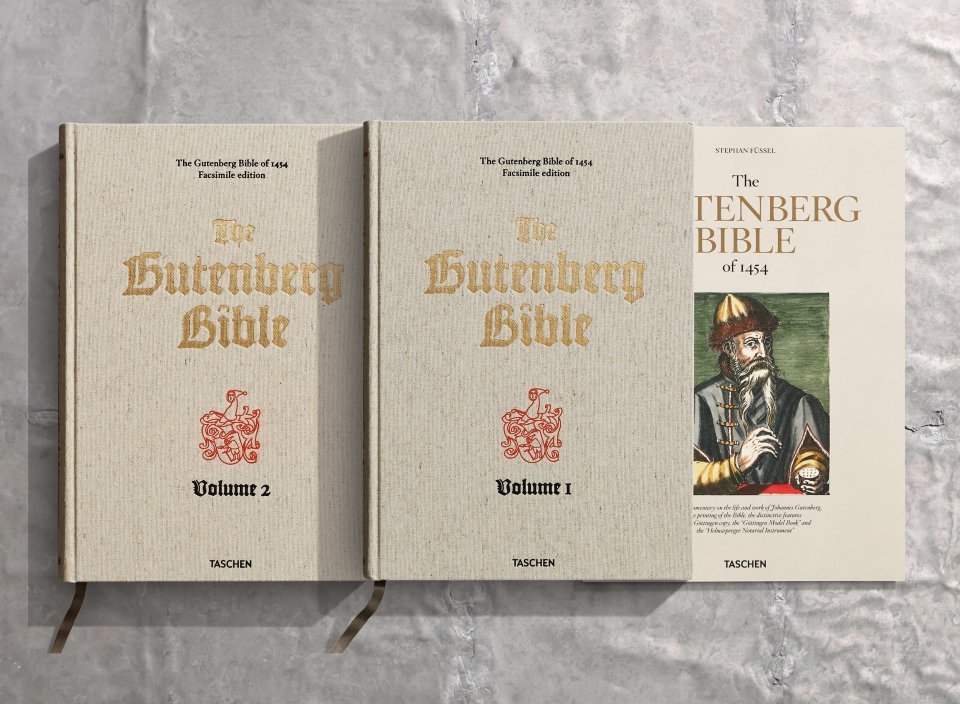 The Gutenberg Bible of 1454

The Book That Changed the World

A complete reprint of the revolutionary Gutenberg Bible “B42”

The printing press has been called the greatest invention of the second millennium. Published in Mainz around 1454, the Gutenberg Bible was the first major Western publication to be printed with movable metal type, ushering in a whole new age of knowledge distribution through mass-produced books.

Before Gutenberg, woodcut printing and early forms of movable type printing had been mastered in Asia, but had yet to reach Europe. Instead, each book had to be copied by hand in a long, labor-intensive process. Not only did Gutenberg’s innovation of mechanical movable type significantly speed up production without sacrificing quality, it irreversibly enriched public knowledge, pioneering mass communication and allowing people to access ideas and participate in discussions like never before. When it comes to radical revolutions in media, the Gutenberg Bible is up there with the Internet.

This facsimile edition derives from one of the very few surviving complete vellum Latin originals worldwide; the Göttingen Library edition, one of the most valuable books in the world, listed in the UNESCO Memory of the World program. All 1,282 pages of this artistic and technological masterwork are included, along with a companion book written by Stephan Füssel, Gutenberg-Chair at Mainz University, introducing Gutenberg, his transformative influence, and two important documents of the time: the Göttingen Model Book which was used to illuminate the Göttingen Library edition and the only surviving notary document by Ulrich Helmasperger, which records the history of this unique invention and its product, the Gutenberg Bible.